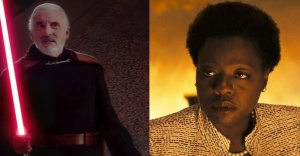 (This post contains spoilers about Suicide Squad, and the Star Wars movies.)

Recently, I was talking to a friend about the moment when the Star Wars prequels truly lost me.  We had already laughed about all of the bad dialogue and wooden acting, and agreed that no words were needed about the Binxian heresy. But as I explained to him, I wasn’t talking about the worst or the most laughable or groan worthy moment from those movies- instead I was bringing up the moment where I realized these movies had truly abandoned any of the complexity and nuance that had been such a bulwark of the original story.  I was talking about the moment in Attack of the Clones when Count Dooku, leader of the separatist movement, reveals that he has been working all along for Darth Sidious, the man who will come to be known as the Emperor.

A brief (I promise I’m getting to Suicide Squad and Amanda Waller soon) explanation for the non-Star Wars geeks.  Count Dooku is leading a movement of separatists who wish to break away from the Galactic Republic. They are portrayed in a ham-fisted manner (like everything else in the movie) but their complaints don’t seem to be without merit, particularly in terms of the inefficiency and corruption of the Republic’s government and the arrogance and out of touchness of the Jedi. In this light, Dooku can be an interesting villain; someone with legitimate grievances who is taking steps we may disagree with to advance his cause. The fact that his arguably justifiable rebellion against the Republic is also playing into the hands of guy behind the scenes who wants chaos and dissension only makes it more interesting.

There’s a lot of nuance there that can be explored and played with, because in that story, Dooku genuinely believes himself to be the hero. So not only do you have a story about a villain whose end goal you might agree with, but you’re telling it all against the backdrop of the growing evil of the Emperor-to-be that Dooku is inadvertently helping.  A story about the Jedi trying to figure out the ‘right’ thing to do in a situation like that, and how that confusion adds to Anakin’s own journey toward the Dark Side would have been an interesting one, and a fitting counterpoint to Anakin/Darth’s journey in the original movies.

But instead all that goes out the window once Count Dooku reveals that he’s been secretly working with Darth Sidious all along. Now, instead of legitimate conflict where the empathy of the Jedi might allow them to see some virtue in both sides, we lose any vestige of sympathy for Dooku and his separatists. Not that I had expected much nuance- the characterizations are universally two-dimensional throughout the movie, the rest of the separatists were portrayed as craven buffoons, and the Dooku reveal was hardly a surprise.  But there is a difference between trying to create a morally gray situation but doing it badly and just flat out telling us that someone is a “bad person” full stop.

So, why, you may be asking, am I talking about the flaws of a movie made almost 15 years ago? Because while I enjoy pointing out the flaws of this movie in a way I normally reserve for Snyder creations, this particular failing perfectly illustrates what Suicide Squad got right about Amanda Waller.

As I’ve mentioned before, for all its flaws (and there are many) the best part about Suicide Squad is the way it explores what it means to be a villain, particularly in the case of Amanda Waller. She brings together this team of self-described bad guys, all of whom know what they are and where they fall on any moral scale. They may revel in it like Harley or see it as an unfortunate means to a better end, like Deadshot, or they may feel like forces beyond their control made them bad, like Killer Croc or El Diablo, but they all accept the idea that they’re the villains in the story.

Amanda Waller is convinced she’s the hero. And that’s what makes her so dangerous. And so relatable.

She has been convinced by recent events, (the arrival and then death of Superman, and the knowledge that other powerful beings are out there and may well have malevolent intent toward Earth) that humanity is in grave danger and that the normal methods of dealing with security issues aren’t going to work.  Nor can you really blame her, given all she’s seen. In the same way, she has come to believe that she is the only one who sees just how dangerous the situation is, and what dire steps are needed to stop. Here, once again, it’s hard to argue with her. She has to fight her way through the military bureaucracy because no one else seems to be willing to do what she will, to take the hard but necessary steps, (in her mind at least) to save the planet.

Her desire to save the planet, (and her belief that saving herself and her reputation is essential to saving the planet since no one else will do what she will) is what leads her to justify horrible actions.  When she coldly shoots her own operatives out of fear that they might compromise her secret and thus her position of power, even some members of the squad do a double take. When you can make some of the people you yourself have described as the baddest of the bad look twice at how far you’re willing to go, it would seem you’re ready to be fitted for the black hat.  And yet its still hard to see Waller as an unredeemable villain, not only because she is so convinced she is doing the right and necessary thing, but because it’s hard not to walk out of the theater wondering if she might be right.   It’s easy for me to step back and tell myself that she’s motivated by fear and by self-preservation and thus I can smugly pat myself on the back about how wrong that all is. But when I think about just what that fear would be like, added to the frustration of feeling like no one else gets just how bad things are, and how something MUST be done – it’s not hard to relate to her.

Nor is it hard to see mirrors of her in our own world. How many times do we see terrible things being advocated or justified out of fear? Fear of Muslims, fear of immigrants, fear of ‘the wrong people’ in our bathrooms or our communities. For many of those, it’s easy to see that the fear is just a tool to justify hate, but I can remember those days as a New Yorker after the Towers fell, when it felt like our entire country was under attack in a way we would have previously never believed possible. I don’t think I’ve ever seen more fear than I did in those days, and while it’s easy to look back at the two wars, the draconian security measures, the armed police at train stations and city corners, and everything else that fear led to and shake our heads at how wrong it is, I remember a good many good-hearted people who were ok with those things. I remember that, for a while, I wasn’t sure about some of them myself.  Because we were afraid.

In the same light, how easy is it to come to see a person, or an institution as so vital, so needed, that we start justifying its actions because any harm to it might prevent it from doing what is needed?  We can look at Waller and see the worst parts of patriotism, or the danger of letting respect for an institution like the church or the police turn to blindness. Harder is asking when that blindness comes closer to home, when we let our desire to preserve ourselves or our families or the people and things dearest to us blind us to the corners being cut or other problems.

In the end, that’s what separates Waller from Dooku. (Well, apart from the writing, the acting, the context, and the lightsabers. Waller wins on the first 3, but lightsabers are cool.)  When Dooku is revealed as having no genuine interest in the separatist cause and the corruption of the Republic, except in so far as he can use it to help Darth Sidious take over, the movie is telling us that he is a flat out bad guy. That he isn’t someone we can or should relate to.  Which not only makes for a boring story (though Attack already had that well covered) but fails to live up to the standard the Star Wars movies had previously set.  After the redemption of Vader and how easily I could have understood Luke’s slide into the Dark Side, I expected more from the storyline about someone who leads a rebellion against the Republic for understandable reasons.

In contrast, Waller is so powerful, because she is so relatable.  Sure, I can tell myself she’s wrong to force the squad to do things under threat of death, or any of the other horrible actions she takes. But if I want to tell myself she’s wrong to justify any and all actions out of fear, I have to ask myself what I let my own fear justify.  If I want to judge her for her belief that she is indispensable and thus must be protected for the greater good, I have to ask how what I think is indispensable, and what I would justify to protect it.

(For more on my thoughts on the topic of villains in Suicide Squad, listen to my podcast episode about it here.)